Why we love crime series to death

There's something addictive about crime series. If you like the main characters you're happy to read more about them even if the plot wasn't that great, or the ending disappointed. So if you get the whole package – great characters, tight plot, swift action and a satisfying denouement, that is crime series heaven. I should know – I've consumed hundreds of them as bedtime reading. Non-work reading.

I can't explain the logic of this, but because I edit literary fiction, I'm no longer particularly interested in reading it outside work. Yet, though I also edit crime fiction, I still love reading that. I've tried to analyse why it still grips not just me but millions of other readers, making it such a popular genre. I do think it's about endings, something not all crime writers – ironically – are good at. It's about all the problems being solved, the good winning and the bad being punished: a neat resolution which we long for in life but which rarely happens.

I'm lucky – the crime series I edit are brilliant examples of the genre. When William McIntyre sends me his new Robbie Munro thriller I don't think when can I manage to start the edit? I think – goodie! I'm going to enjoy this. And I always do.

Fixed Odds did not disappoint. The fifth Robbie Munro novel to be published by Sandstone, it takes Robbie, defence lawyer with attitude, a little nearer to the line between lawful and unlawful. He's flown close to the sun in previous novels (to mix my metaphors nicely) but here he is tempted take advantage of an old woman who refuses to accept the stolen property he's retrieved for her. If he hangs on to it he knows it can be used to make a handsome profit. However, when Robbie discovers the true history of this piece of property, he has to think again.

I love Fixed Odds for its tight plotting and for the way Robbie gets into such awful fixes that you can't imagine how he's ever going to get out of them. Then miraculously and often hilariously, he does. However, it's also about the characters. I've followed Robbie through ups and downs in his love life, his spiky relationships with his dad and his successful brother, and the biggest and most important relationship of his life – with his little daughter Tina. The dialogue is sharp and funny: William McIntyre can home right in on the banter between two sparring brothers, or the disconcerting questions of a five-year-old, just as convincingly as the patter of career criminals.

With a story that weaves together several plot lines, any one of which ought to be enough to keep Robbie busy, it's just as witty and page-turning as all Robbie's previous adventures. And I'm the lucky reader who will get to see the next one first! 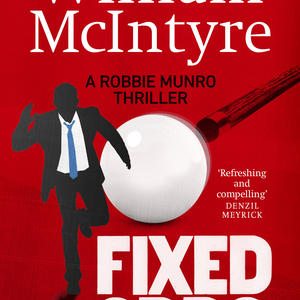