What's wrong with the past tense?

Every editor is allowed a rant now and then. I think this one is overdue.


What is wrong with the past tense? It has fallen almost completely out of use in fiction. Novel after novel comes to us at Sandstone written entirely in the present tense. Now, it seems, non-fiction has been infected with this virus too.

What's wrong with it, you cry? Everyone's doing it.

Let's deal with non-fiction first. There are memoirs now written entirely in the present tense. What is that about? Are you pretending you've just leapt from a window on the twentieth floor and your life is flashing before your eyes, all of it at once, as you fall? It didn't happen all at once, it isn't happening now. Some of it is OVER.

More seriously, as R commented to me the other day when we were discussing just such a memoir, the present tense used throughout doesn't allow for perspective or reflection, surely essential to a well written memoir. That facility, to reflect, to review, to muse, to differentiate between now and then, is valuable in fiction too.

At the simplest level, the sibilants of he says/she says; he feels/she feels are more obtrusive than the quieter he said/she said; he felt/she felt. Constantly buzzing in the mind's ear, they are wearisome to read. There is something relentless about the present tense. Are we never going to get out of this moment? Is it going on and on and on?

Worst of all are historical novels written in the present tense. I don't think I need say more about that.

The English language is subtle and various; it's rich and beautiful, and full of treasures. If you use the present tense all the time, you're cutting yourself off from a tool that is at least useful, at best powerful. You've made it impossible to shift tenses for dramatic effect. You can't use the historic present.

In my own work, I use it sparingly – but always for a reason. In The Treacle Well, there is one short chapter which is in the historic present. Some time after an event so terrible for her, her life seems to have stopped, Caroline has a morning when at last she believes she might go on after all, and begins to see how that might happen. That morning, those brief moments, have a heightened sense of reality for her: she is poised between the awful past, and the possible future.

In Waiting for Lindsay it's episodes in the more distant past which are in present tense – snapshots of important scenes, held in aspic. The final chapter, going right back to the day in childhood when Lindsay disappears, is in the present tense. That memory is held in the minds and imaginations of the other characters for ever; it truly is, in one unhappy sense, still present.

While I absolutely agree with articles, blog posts and some short stories being in the present tense, and of course poetry, I don't think I'll ever believe a whole novel is better than it would be using the flexibility of past tenses, with the added potential of the historic present – when it is justified, when it adds to atmosphere, or deepens meaning.

We are made of stories. All the best ones begin, actually or metaphorically, Once Upon a Time. 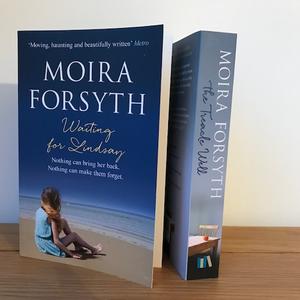