What I Did on My Holidays

Of course I'm getting older, we all are, but usually I don't feel it. Instead I have the sense that I stopped somewhere around forty which was a good age, though my life fell apart soon afterwards and took some time to piece back together in a new form. Windows 10 for women, perhaps.


Then I went on holiday.

Over the years, my holidays have diminished, and apart from two long distance trips to spend time with my children during their post-graduate travelling, I have had none of the fortnights away other people seem to manage. A week in a cottage in Sutherland, or a few days in a hotel, sometimes in another country, more often not, have been the sum total of holidays I've had for a long time. Then my children suggested we mark my birthday this year by going away together. I didn't mind where we went, I was so touched they actually wanted to do it, so I left it up to them to decide. They've travelled much more than I have, so I thought they knew best.

That was how, in January, I came to journey half the way across the world to the Galápagos Islands. I should have paid more attention to the itinerary before I went, and to the fact that my son and daughter are very active people. 'You'll be fine, Mum, you're really fit,' they said to reassure me. It turns out I am quite fit, and that's just as well. I found out quite a lot about myself in those two weeks. I guess you never stop learning about your own inadequacies!

It also turns out I'm not very good at snorkelling, but I did give it a go, and managed to see lots of beautiful fish, one distant shark, but no turtle. (I really wanted to see a turtle, my sympathy for them entirely based on reading Russell Hoban's Turtle Diary.)

What I had most wanted to do was swim in a warm sea, and I did that, gloriously, but it wasn't a holiday with much free time, so it was mostly on with the next thing – a four-hour hike up a volcano and back, followed by a 14k bike ride to the strange and haunting Wall of Tears, and on the last day kayaking, which I absolutely loved and told myself I was quite good at. However, it was a two-person kayak and the steering was done by Gonzalo, one of the guide's young helpers, a smiling Galápagon cheerfully tolerant of my efforts.

We've brought back so many memories of these beautiful islands – of the little penguins swimming around us in the sea, the sealions taking over the benches at the sea front, the pelicans standing in a row under the table at the fish market in Santa Cruz, waiting for scraps, the iguanas on the rocks, the tiny lizards, the beautiful birds, the pink flamingos searching for the shrimps that give them their extraordinary colour, and the turtle who swam just under the bridge where we stood and popped his head up to let me see him at last. In time we'll forget the overpowering heat and humidity and having no hot water in one of the hotels, and the lack of the kind of sanitation we take for granted here…. Near the end of our stay, my daughter said they hadn't really considered that I'd not done the kind of travelling they have – roughing it and coping with very different ways of living. When I said this to my son he said, 'You're robust, Mum, you're fine.' I think that's a compliment.

So all that means I don't need to feel old, even middle-aged? No such luck. Nobody on the islands was near my age except for Carol-from-Manchester in the hotel on Isabela who has decided to live there permanently, and the taxi or bus drivers. Everyone else was young. It was Carol who pointed out that nobody is old in Galápagos. Do they die, or just stay indoors? At any rate, I got used to being by far the oldest person in sight. It didn't matter – except that standing in the sun being lectured on the life cycle of the giant tortoise is quite hard when all you want to do is sit down and have a rest!

We learned so much though, and I've nothing but admiration for the conservation work on the islands, and the knowledge and expertise of our guides. I'm very glad I went, and have come home with my mind (I hope!) broadened and grateful for my children and the life I've come back to.

(in the photo we're wearing our sun-proof tops over swimsuits - even Factor 50 wasn't safe enough sometimes!) 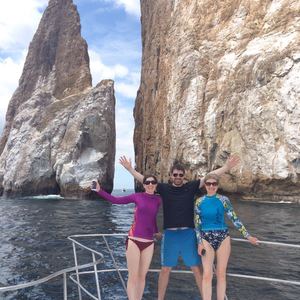