What Friends Are For

If there's anything I dislike it's having my photograph taken, so I wasn't much looking forward to last Thursday. Having decided I needed new portraits before my next novel comes out in July, I began looking for a photographer, and because I'm now so skilled in social media (!) I found someone through a Facebook group I'm in. Near Edinburgh. You may well ask why, since I live in the Highlands, I didn't just go to a local photographer, but I couldn't find anyone I thought would be right. I was nervous about this. I haven't liked a photo of myself since R. took one in black and white nearly twenty years ago. No, I definitely can't use that. I don't want to kid everyone that's what I look like in case it's a terrible shock when they actually meet me.

So…. having spent the night with my niece in her tiny but perfect flat in the city centre, I set off for Dalkeith. On the bus. I can't remember the last time I went anywhere on a bus. Most of my contemporaries have bus passes and whizz about Scotland free. My sister gives me tales of reckless pleasure on the A9, as the free bus delivers Irn Bru and Tunnocks Caramel Wafers to their pensioners to keep them happy on the way. I've stuck to the train – but whether because I like having a table and being able to work, or just because I'm claustrophobic on buses, I leave you to surmise. Anyway, this was an ordinary service bus and, if I'd wanted to, I could have gone all the way to Hawick on it. I'd have quite liked that. I had a brief vision of myself free of all commitments and indeed work, living in a wee flat in Edinburgh and taking a different bus every week to explore Scotland. I was joined on this bus by only a few passengers and the happiest little dog I've ever seen. Its tail wagged non-stop as it greeted me like a long-lost friend, then sat contented on its owner's lap for the rest of the journey, looking out of the window.

Tina, the photographer, was there to meet me at the bus stop when I got off. From then on, the day just kept getting better. Which is not what you'd say about most days. Admittedly, I didn't once check the news on my BBC phone app or look at Twitter.

For the first time, in Tina's wee studio at Newbattle Abbey, I actually enjoyed having photographs taken. She was so friendly and helpful, providing coffee and snacks, and even face powder when I got a bit hot and shiny, she made it all extraordinarily painless. I even liked some of the shots she showed me on the tiny screen on her camera. I haven't received the results yet, but I feel much more confident than usual that they'll look all right. There's a strange thing happens when someone shows you a photo of yourself – well, for me, usually that's a moment of utter horror – (My God, I don't look like that do I?) but even when the image is attractive, I look at it and think – oh, is that me? As if it might magically be someone else – the someone else I am in my head. Whoever that is.

At any rate, it was a tremendous plus that Tina altered lighting, tried different angles, and different backgrounds and poses. We even tried some outdoor shots. Then, parting reluctantly (me, anyway) as I liked her so much, I got the bus back to Edinburgh and headed for the Lawnmarket café to have lunch. One of my favourite places to go, when I'm waiting for a train.

The last good thing about the day was meeting a friend at Perth, and travelling all the way to Inverness with her. We sat together and agreed we'd talk for just a little while, then read. You guessed it. We talked non-stop all the way to Inverness. Not loudly I hope as it must have been rather too enlightening for anyone sitting nearby. We were opposite a young man until Pitlochry, but moved when the carriage emptied out a bit, to give him peace. He seemed almost sorry to see us go, which was surprising. If you've ever sat next to two middle-aged women having a heart-to-heart and falling about laughing, you'll wonder that he wasn't thoroughly relieved to see the back of us.

At Inverness Station, our chaps were standing talking to each other as they waited for us. By that time, we'd each decided what we were going to have from the menus of the separate restaurants we were heading for, and had in less than three hours, sorted out most of the problems of life, marriage, divorce, being authors, motherhood, grandmotherhood…. The list could go on.

Afterwards, in high good humour, I recounted my day over a giant superfood salad and a glass of Pinot Grigio, while no doubt C. was doing the same over Garlic Chili Prawns. What made it so special? A day off, certainly, but not just that. A day of talking – and listening – to other women. In the Guardian Review this week Richard Ford wrote a downbeat piece about how friendship in his view is over-rated, but I couldn't agree. When I told my daughter about my day she said she needed her female friends, and that being with them is 'good for our mental health'. She's right. It's my female friends who've helped me through the worst of times, and whose excellent company I want to acknowledge and celebrate now.

The photo by the way is of the dog. My own portrait will follow soon! 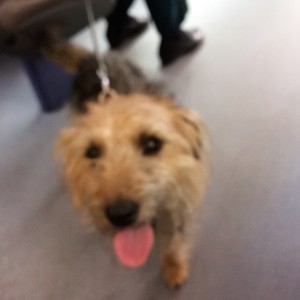