It's something I don't do very often, so maybe that's why I lost my head. I confine myself usually to Tesco and the butcher and the garden centre, and there's no scope there for shedding inhibitions. In any case, I go alone, with no one to inspire me to rashness or wrong decisions. I've only myself to blame if I start thinking 3 for 2 is a bargain when it's for something I don't use much. On the whole, I've become immune to the blandishments of Tesco, and the butcher just gives me what I want, doesn't try to seduce me with stacks of sausages or the daft idea that three joints of lamb are better than one. Anyway, I don't eat meat, I only go in there for free range eggs and ok, meat when it's for R, or guests, or for fish, as the village branch sells that on Tuesdays and Fridays.

Didn't I say? Shopping. That's what I don't do these days. After about an hour I become claustrophobic and giddy, and head for the doors. Last week, though, I had a day in London with my future daughter-in-law, to buy something for me to wear at her wedding to my son in September. Actually, my idea was we'd wander round a few shops, have coffee, plunge briefly into another shop, have lunch, a bit more pointless wandering, then afternoon tea. I was more interested in the stops than the shops, as you'll have gathered. However, L. is an expert shopper. She began by persuading me to try on one or two dresses I knew were hopeless, to prove you can't always tell from the way they look on the hanger. 'Right,' I said, tricked out in a long, brightly coloured effort with beading, ' now can we count this one out? I feel like an ageing hippy.' I reminded her I have, after all, had a lifetime that's much longer than hers, to find out what I look terrible in.

However, as we went on, it became clear our tastes were not that far apart. In Selfridges, a helpful assistant who wasn't twenty, five-foot-ten and willow-slim, took an interest and began finding us dresses we liked. I muttered about not wanting sleeveless, and when L. asked what was wrong with my arms, I tried to explain that in the Older Woman, arms either develop bat-wings or become stringy and mine are the stringy kind. This didn't seem to cut much ice with L., so we compromised…

Success! We found a pretty dress that didn't cost as much as the one I had for my daughter's wedding a couple of years ago. It was after lunch (well, brunch, and costing as much as two three course meals would at home) that things went a bit haywire. It must have been something to do with turning out of the melee of Oxford Street into the sudden quiet of South Molton Street, with its designer shops and chi chi cafés. It was like being suspended in time, unreal.

I'd stopped looking at price tags by then, which will tell you a lot, given I grew up in Aberdeen with principles of thrift, hard work and value for money. When I said to L. I could get a bag that colour in New Look, she pointed out the softness of the leather, the high quality… and I gave in. Oh well, they're very pretty shoes and the bag is lovely. Also, I have no more children. I need never do it again.

Except, I still have to find a jacket.

I used to call this delusional shopping, where you acquire the notion that you're richer than you really are, the John Lewis effect. That's the sort of store you go into with all your faculties and sense of self-preservation intact, but within twenty minutes you start fancying you actually need new cushions. Nobody needs any cushions in my opinion, but they proliferate, along with glorious swathes of curtain material and acres of bed linen and deep sofas and pretty teapots.

Perhaps I've just lived in the country too long, and am too little exposed to shops. At any rate, I'm going to stick to garden centres, the supermarket and the butcher from now on. 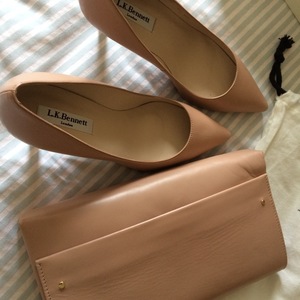