The Pleasures of Illness

Do you remember being ill as a child?


In adulthood, I wasn't always in tune with my mother, or she with me, but in childhood, and especially when I was ill, she was the best mother in the world. I was ill a lot as a child, not just with the childish ailments – and I had everything except mumps and whooping cough – but flu more than once, glandular fever and a strange illness that went on for weeks without any diagnosis. In those days, when you were ill you went to bed. You stayed there till the fever had gone and you were able to get up on wobbly legs and come downstairs in pyjamas and dressing gown for a while, perhaps even meals. The next stage was getting dressed and being up most of the day. Finally, you went back to school, fed up by this time with being ill and away from everything.

The charm was not in being ill or lying in bed, but in all that went with it. First the coal fire in the tiny fireplace in the bedroom was lit – we had of course no central heating. It cast its warm glow into the room, and when the light went out at night and you were meant to go to sleep, it sent flickering shadows onto the ceiling. There were stories in those shadows, worlds. Then the library books. Usually, we went with our mother and chose our own, but left to herself, my mother had to decide. The selection was always a surprise and I read books I'd never have chosen for myself.

Then there were the cut-out paper dolls. This was a girl in her (pink) underwear pictured on the cardboard cover of a booklet, with different outfits on every page. You cut these out carefully and hooked the clothes onto the girl with the little labels provided. Total disaster of course if you accidentally cut off the labels instead of cutting round them... There was a slit between her cardboard feet, so that you could make a stand for her. Not that she ever stood up very satisfactorily, and indeed, she was a disappointment altogether, for playing with. You spent hours doing the tedious cutting out, then trying on all her clothes in turn. After that, what could you do – she fell over, the clothes labels tore, the clothes wouldn't stay on… Boredom, if you were well enough to play, soon set in. If you weren't, you dozed off, temperature rising again.

The solution, for my sister and me, was to draw and make our own cut-out dolls, since designing the clothes was a lot more fun than cutting out.

Of course, if it was Bunty or School Friend day, that was a great bonus. Back would come our mother from shopping with the comic in her old leather 'message' bag, and if you were lucky, there was a free gift attached to the front page in a cellophane packet: a bangle of blue plastic beads or a set of transfers. Then you could get stuck in to the adventures of the Four Marys or any of our other plucky heroines. Oh, there was no end to the pleasures of being ill and eight years old. I'm not the only one to think so – RL Stevenson remembers it just as fondly, in his poem, The Land of Counterpane.

I've been thinking about the compensations of being ill for two reasons. First, one of the characters in The Treacle Well, the novel I was working on all last year, is ill a lot when she's very young, and I drew on my own memories of childhood illness when I was writing about her.

Secondly, I now know the weird symptoms I've had for days add up not to any of the appalling diseases I discovered on a health website (phew!) but simply shingles. Painful and unpleasant, but not life-threatening. I can stop re-writing my will. I'm not in bed, and not just because I don't have my mother to make it all right any more, but because I have the logs to get in, the cats to feed, me to feed, and work to do. R. is going to the supermarket for me, and I'm not running or walking the dog for a few days, but otherwise, business as usual.

It's just no fun any more, being ill. 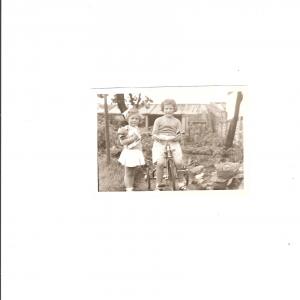