The Optimist Reflects on 2015

The glass half full/half empty image is a complete red herring – sorry about the mixed metaphor. You are either an optimist or… you're not. Realistic, perhaps.

I have spent a wasted ten minutes this morning trying to get the cat to do something interesting in relation to the Christmas tree so we can post a photograph on Facebook. He is resistant to all efforts, as the most he's done is sit under it looking resentful or lie on his chair quite near it. He has been completely outshone by Claire's cat Ginger who actually climbed into the tree and looked really cute. Mr Sparks doesn't do cute.

I realise I was too optimistic about that, as I am about most things. I was probably the only person in the north of Scotland to hang the washing outside today in a brief flash of sunshine, which was swiftly followed by torrential rain and a howling gale. And yet, not learning much from this, I was tempted in the next burst of sunshine, to put it all out again. No, I didn't do it.

It's been a difficult year, but how depressing if I were to relate all the bad stuff – it's happened, it's done, and we're onto the next thing, as you have to be if you're going to survive more or less intact. It's hard though not to be affected by so much loss. Every time I go down the garden to where our wee cat Mika is buried near the trees, a block of sandstone to mark her grave, I just stand and cry –several weeks after she died. You can cry for the cat, and somehow encompass in that grief, all the mourning for friends who have also gone.

It's also been a year of hard work. Despite the disruption of having the upstairs of the house extended, I've edited ten books, eight of which are now published, two to come in the early part of 2016; complete my own, The Treacle Well, and see it into the world; deal with several hundred submissions to Sandstone; and begin another novel. I won't bother listing the many things I've failed to do. You could write that list yourself – it must be obvious I need to clean my house, work in my garden, clear out the polytunnel, and oh yes, see some friends.

A lot of my friends are retired, and theoretically have all day to go for coffee, join art classes or walk dogs, but they are always telling me they don't know where the days go, they're so busy. It makes me wonder how on earth we managed with full-time day jobs, young children, other stuff like writing a novel or completing the Munros, and decorating our houses ourselves. The other day my daughter and her husband fetched some furniture from me for their flat, packed the van with the help of a friend, drove to Glasgow, unpacked on their own, hauled it all up two flights of stairs, took two old sofas down two flights of stairs, returned the van, then went Christmas shopping. I felt tired just hearing about this. How on earth????

Then I remembered. Oh yes, they're young.

When we were young, we could do that too. I hate to admit that age has anything to do with anything – that I can't do all the things I used to. Well, I can do them, just not all in one day.

So if I have a new year resolution it's to be just as optimistic, and to keep doing everything. Only more of it. Fingers crossed.

Ha! Just got the cat to sit still for a ten seconds with a bit of tinsel on his head! 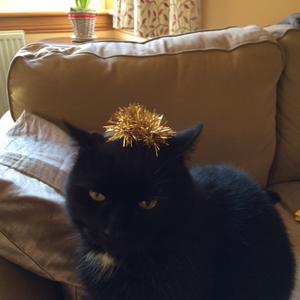