I'm living in the past.

I've been dividing my reading (not reading for Sandstone Press, a different matter) between revisits to Barbara Pym and my new exploration of the Quirke novels by Benjamin Black (aka John Banville). Barbara Pym wrote several of her novels in the fifties and early sixties; Quirk inhabits 1950s Dublin. What different worlds they are – Pym's is full of Excellent Women, replete with curates, vicars' wives, anthropologists, typists, antique dealers and elderly widows and spinsters who do not seem to have to earn their living. They go to conventions (sometimes), bring and buy sales and jumble sales (often) and tea parties (daily). Single women have lunch in small depressing cafés (baked beans on toast, toad in the hole) or when meeting gentlemen, in Lyons Corner Houses or very occasionally in pubs where they make the mistake of heroically trying to drink beer when they are much more at home with a small sherry. I recognise that world and have to some extent inhabited corners of it.

Quirke lives in a fog bound, dark and dubious city, peopled by the untrustworthy, the wicked and the drunk. He struggles with temptation, but not for long; he attempts to bring terrible wrongs to light, but inevitably fails to get anything done about them. Happiness is fleeting; contentment unknown.

They have this in common, these two worlds – people have to make do with less than they want. Barbara Pym's women want love, fulfilment, a world that's brighter and more satisfactory than the one they inhabit. They make less of it; they are used to disappointment. There is at least no evil of the kind Quirke encounters.

They have something else in common: there are servants. Even if it's only old Maggie, struggling through with the meat and potatoes for Quirke and Malachy, widowers both, there is someone to wait, someone to answer the door. In Pym's novels there are maids, cooks and even gardeners, and everyone has a Daily Woman.

My house has bells in every room, no longer working, unfortunately, or perhaps not, since there is no-one to ring for except me, and I wouldn't want to encourage anyone else to do that. Even in this house, not grand at all, there must once have been a maid, someone to trot from kitchen to living room or bedroom (?) and say, 'You rang, Madam?' or perhaps just to appear and stand breathing heavily in the doorway, making you feel guilty.

There's a questionnaire in one of the weekend newspapers (Ok, the Guardian) regularly interviewing allegedly famous people (many of whom I've not heard of) and one of the questions is 'What one thing would most improve the quality of your life?' No argument there.

I want a maid, indeed a housekeeper, who will tidy up, do the shopping (after of course discussing the day's menu with me), hang out washing, take it in, iron it and put it away in the right places, answer the door, remember to phone the sweep, the plumber, the piano tuner, the vet… oh, and take the cat to the vet, a trauma I'm not prepared to undergo again. I also need a daily woman. I did once have a cleaner but she was terribly expensive and used to bring her mother in sometimes to help her, a woman I had never set eyes on. Anyway, that arrangement came to an end along with my nice Local Authority salary some time ago.

I also need a gardener. I love my garden but it's getting away from me, I feel defeated before I even begin the weeding. Who invented chickweed? Curses on them. What I need is Mr McDonald, an elderly curmudgeon, who will work away every day, slowly but methodically, the heavy work done under his orders by the Gardener's Boy. Obviously, I need the Boy too. At the end of the week, I'd hand Mr McDonald two and sixpence and the Boy a shilling, and they'd go away perfectly content.

This is where it all falls down – when the money comes into it. I can't afford the Boy or the Daily Woman, never mind the rest. So bring on the time machine and I'll head back into the past, where ladies like me didn't actually have to have a job, let alone a career, and there was always someone to do the 'work of the house' and be jolly grateful for the chance. I could arrange the flowers so cleverly grown by Mr McDonald (though I'd have to pick them after he'd gone) and go to tea parties and – well, we're heading down the road of the poor woman I read about in a short story once (Katherine Mansfield maybe?) the highlight of whose Sunday was to wash the puff from her powder compact. Now there's something you never hear of anyone doing these days.

There is of course a terrible risk that the time machine, unreliable as these infernal inventions always turn out to be, instead of shipping me into a Barbara Pym or Agatha Christie novel, would toss me onto a greasy pavement in Dublin in 1956, leaving me stranded in the fog, with only a faint hope that Detective Inspector Hackett will eventually come and sort things out.

I'm off out to the garden, to do battle with chickweed and earth up the tatties. Perhaps I'll stick with the 21 st century for now. 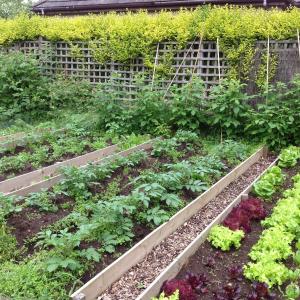