When it comes to Christmas trees, there is only one thing worse than buying, bringing home, putting up and decorating the thing on your own, and that is doing it with someone else. If I want to avoid curses and family breakdown, I do it myself. I've therefore developed an almost foolproof method of installing a tree, in such a fashion that it stays where it's put and is kept watered if not fed.

A bucket of potting compost. It has to be that, not soil, or you risk bringing worms into the house, and I don't think I can cope with that. Bad enough Mr Sparks singing his song at the front door and when it's opened attempting to bring his struggling captive into the house to kill and eat. (He's a cat, not a homicidal lodger.)

So, a bucket, a sheet of black plastic, another bucket with the compost in it, a square of cardboard and the tree. Sit empty bucket on cardboard. Put tree in, and hold onto it while you use a trowel to fill the empty bucket with compost from the full one. (This sounds easier than it is, unless you have extraordinarily long arms.) Pack it down. Fill bucket as full as you can. Wiggle tree. Stand back. Realise tree leaning drunkenly to the left. Do a bit of repacking of compost with tree as straight as possible. Stand back, admire, realise tree now tilting to right. More repacking, damping down. Finally, tree almost upright. Leave it like that. Fed up anyway. Pour water into bucket very carefully as a bit of fed-up carelessness at this point results in water all over living-room floor.

Question: why are Christmas lights now all made on a sort of loop so that you can more easily wind them round yourself than the tree?

This is of course advice that will come much too late for any sensible person as the Sensible Person bought an artificial tree twenty years ago and just pops it up on its integral stand at the touch of a button. And anyway, did it three weeks ago. I on the other hand, attempt to recreate the magic of Christmas every year as a combination of Little Women, Pickwick Papers and Lucy and Tom's Christmas by Shirley Hughes. One of my favourite books of all time. Or at any rate, I did, but this year has found me still buying presents just before Christmas Eve with no food prepared or made. I think I did so much cake-making for daughter's wedding in October I've lost the will for it, so for the first time for thirty years – more – I've not made a Christmas cake. Nor has the sky fallen in. It's usually me who ends up eating it for weeks after New Year anyway.

Somehow I'm finding it hard to think the same way about Christmas. The world, as Wordsworth observed, is too much with us, and we can't ignore the events of this year – tragic and comic but mainly tragic – that have been beyond belief, had no reason or sense to them, and demonstrate that wicked, cruel, intolerant and conscienceless people are not dying out. Unfortunately. So we cultivate our little garden, put up our Christmas trees, try not to fall out with our loved ones, and keep warm. What else is possible?

When my mother thought something outrageous or ridiculous, she would say, 'Well, that's the giddy limit.' Maybe this year we reached the giddy limit. I'm lucky, it's not my precipice we hover over, though with a quick twist of fortune, it so easily might be. Walking next-door-dog the other day, I came across, at the end of a cul-de-sac, a little house with a sign outside painted neatly 'The Limit'. I wondered why they didn't just call it 'The Giddy Limit' and be done with it. Then we crowded together outside a kindly old woman – or gentleman – would appear at the front door and say, yes, you've reached it, turn back now.

No turning back though – just onwards, into 2015 and through the undergrowth beyond The Giddy Limit. 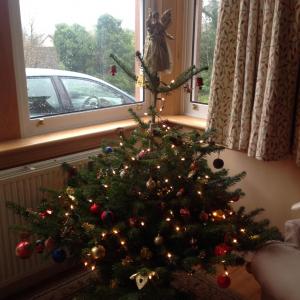