During these hot summer days I'm up early. This is principally because the elderly cat is hurling herself at the kitchen door, pathetically mewing – she thinks daylight means breakfast. I'm also staying up later than usual. In balmy dusk I sit on the front doorstep, both cats quietly beside me, tails twitching, watching something invisible. I've started to believe the only thing missing from making me truly continental is a siesta in the middle of the day, and if the summer goes on for more than a week, I might succumb to that.


The heat means everything has begun to grow at last. The only thing flourishing in the garden, it seemed, all the cold spring, was chickweed, rampant on my vegetable beds. Having cleared one of them thoroughly, I planted out my healthy kale plants, grown from seed. This morning, I discovered the pigeons had stripped them. I've netted them now, though aware of the stable-door parallel, and hope it's early enough for the poor things to recover.Those ungrateful birds, who benefit daily from the carelessness of the sparrows and chaffinches as they throw out unwanted seed from the feeders. I've grown fond of the little collared doves, but I'm pretty sure they're to blame. It might be the crows, but they're such thugs I doubt if a single leaf would remain.The doves are more tentative, pretty and devoted, always seen in a pair. I've gone off them now though.

Still, there are more serious things to worry about, even than whether Andy Murray will win Wimbledon. Punctuation, for example.

I've had a month or so of thinking of myself as author more than editor, but now the launches are over and 'The Treacle Well' getting on – I hope – all right without me, I'm back in full editor mode. We've had a publishing student housed at Sandstone for a couple of weeks and I've been forwarding all the submissions to her so that she can read and assess them, and make recommendations. I'll still have to go through them all myself, but hey, suddenly I realise an editorial assistant would transform my life! One thing leapt out at me from my scan of the books that had come in – something that corroborates recent editing experience.

Will someone please, please abolish the semi-colon? What was once a modestly useful item of punctuation neatly balancing two short linked clauses or assisting a list of phrases, has become the favoured writers' prop. In the last few years, the semi colon has got entirely above itself. What happened to commas and full stops? They are clear, sensible and serve functions that cannot just be replaced by sticking one on top of the other. Not that I claim to be an expert on punctuation. Despite helping to develop the Sandstone style guide I am foxed by a copy editor asking me about serial commas or consistency of commas for defining clauses. I need examples for this to make any sense to me. Context is everything.

There is no context that makes the semi-colon king!

I'm thinking of putting Elmore Leonard's '10 Rules for Writing' in the submission guidelines, but when I looked them up, I discovered many writers had produced sets of rules. They vary in usefulness according to the eccentricity or show-offiness of the writer concerned. (It's ok, by the way, to make up words. Look at Alice in Wonderland. As I often do.) Leonard doesn't say anything about the semi colon (probably when he wrote his rules only academics ventured into using it) but he has plenty to say about pretentiousness in writing.

I have only one rule to add.

Oh, and cut out the semi-colons. Two rules then.

It's probably the heat making me cranky, that and the fact that submissions are now coming in daily, and I don't want to stop being kind and polite to people, but realise I must forget I was ever a teacher and not engage in encouraging correspondence! And yet, and yet – somewhere amongst them will be novels as good as those we've published this year, and I don't want to miss a single one of those fine pieces of work.

Off to wave my arms at the pigeons now.

Not a single semi-colon here. I hope you've noticed. 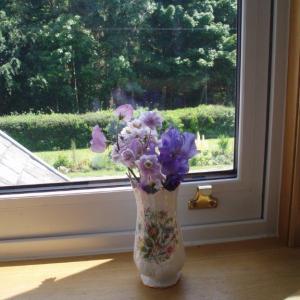