So What About My Desk?

Workspaces are supposed to tell you about those who use them. The desks of famous people: writers, explorers, philosophers – are preserved in their houses or in museums, as if they might reveal the lives. Perhaps they do.

So what about my desk? It wasn't until I took a photograph of it that I realised how everything pictured, taken together, reflected my life: past and present, family and friendship, work and writing.

1. My computer is in the centre, its large screen showing a photograph of the River Dee, near Ballater, where R and I spent a happy weekend earlier in the year. The computer is propped up on a box because if it's not level with my eyeline, I get terrible headaches and a sore neck.

2. To the left, (out of sight in this crop of the photo) the printer my son gave me when he had a spare one. It's not fancy or new, but it's more reliable than any other I've had. In constant use when I'm editing.

3. Also on the left is my notebook, with a handwritten draft of a poem, about to be transcribed as a Word document. Beneath it, my work record, on each page my latest to do list, and the accompanying notes. Depressing when most of the list makes it to the next page, but oh joy, when almost nothing does!

4. To the right – a mug full of pens, the speakers (kept switched off to get rid of annoying beeps), and a basket with (allegedly) current documents, but when I dig down and eventually clear it, it turns out not to be very current at all…

5. The mouse mat is an imitation Persian rug, bought at the British Museum, when Sandstone sold through a sales team employed by Faber, and that was a part of London we were in at least twice a year.

6. A mat for my coffee mug. A stack of sticky notes. I try not to use these too often – it's messy and distracting, to have them littering desk and screen. The to do list is more reliable – and can't fall off!

7. Above the speakers and behind them, two pages of cats drawn by Mairi Hedderwick, which she sent me after we had coffee together and I said I was going to write a book about cats. Which I have not done.

8. Just above the cats, a wee card that was my place marker at my daughter's wedding a couple of years ago. The place cards were all written by children, mine clearly by a neat and careful older one!

9. Above that: my past. The Broadsheet, the inspiration of Anne MacLeod, with poems by – what a list – Tessa Ransford, Magi Gibson, Sheena Blackhall, Janet Macinnes, Cynthia Rogerson, Morelle Smith, Maureen MacNaughton, and Anne and me. It was meant to be the first of a series, but that was the only one that ever appeared, making it, let me assure you, a collector's item. I'd never give mine away. It comes from a special time in my life, hugely creative, and though full of change and uncertainty, often very happy.

10. Above my computer, a reproduction of Tenniel's illustration of the Mad Hatter's Tea Party from Alice in Wonderland, bought by my son for my birthday to celebrate the publication of The Treacle Well in 2015.

12. To the left of these, above the printer, (but also out of sight here) a family photograph taken at my daughter's wedding.

13. Below that, my calendar for 2017. I am never quite up to date with wall calendars and must now turn it over to June. I keep them for the pictures and am always reluctant to leave one I particularly like.

That's it – my life in a single frame. The only element missing is Mr Sparks, my black cat, often to be found asleep on the chair next to mine, keeping me company. Of course, when I'm in the middle of a novel, all this gradually disappears, and the only world I inhabit is the one I'm writing about. Still, this is here to come back to, and I'm grateful for my wee room upstairs, peaceful and familiar. 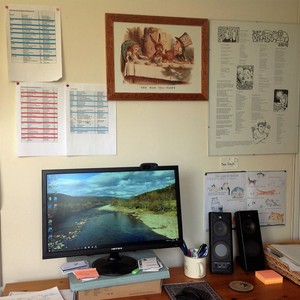