‘SELL US THE ROPE’ – THE EDITOR’S VIEW

The work an editor does with an author on each book is always an individual and very personal process. From the time when I read Stephen May's first novel for Sandstone, Stronger than Skin, I've enjoyed his writing and discussed it with Stephen, but that's quite different from being his editor. So I was absolutely delighted to have the opportunity to explore that with Kay Farrell, who has edited all three of his novels for Sandstone. I hope readers too will enjoy reading Kay's thoughtful and revealing replies to my questions.

Stephen suggests that this, his first historical novel, is no different from his contemporary ones – they're about 'men out of their depth', and it so happens that this time, it's the young Stalin who is out of his depth. Does that ring true for you?

Stephen's contemporary novels have consistently tackled questions of masculinity in modern society – what makes a man, how 'men' should behave in given situations. His work on this theme is brilliant so I was startled when he told me he'd been working on a historical novel and wondered how he'd approach the story. Boiling it down to 'men out of their depth' is a really nice way of encapsulating what the books are about: rather than floundering because of modern societal expectations, Stephen's Koba is rather trying to navigate a complicated and dangerous political group. Koba is already familiar with violence and death, and the use of both as tools. Yet he's caught between the various factions within the party and agents of the Tsar. In Sell Us the Rope he's shown to be a man who relishes control and power but often finds himself without either. The interesting thing for me is that Stephen's heroes usually grow in these types of situations, but Koba instead grows angrier and more resentful, showing him becoming the historical figure we know.

You've worked with Stephen before, but on contemporary novels. What was the greatest challenge for you in editing a historical one, with real people as principal characters?

Historical novels require a great deal of balance. There are known facts about the people in question, of course, and the writer needs to be sensitive to those while interpreting them in the context of the story. The research needs to be in place but not regurgitated at length where it doesn't serve the story; Stephen was more likely to leave out things I felt were important than include too much detail, which is actually more straightforward to address as I'd simply ask for context. I think for me the greatest challenge was keeping an eye out for anachronisms in a far more modern story than I expected for the period. The early twentieth century is a time of great upheaval and social change and it's startling to realise how much progressive thought and activity was underway at a time which I at least often think of as staid and conservative. That was a real eye-opener for me.

Novels do change in the editing process, and after discussion with their editor, authors sometimes decide to add or remove material, or make other structural changes. In your view, what is the most significant difference between the novel as you originally read it, and the final edited and printed text?

Elli Vuokko had a much smaller role in the first draft, and I encouraged Stephen to take us further into her world and the world of the women more broadly. His Koba is brilliantly written but hard to root for, knowing who he will become, whereas Elli has a brightness and sincerity about her that both makes her more appealing in my view, and renders her a terrific foil for Koba's simmering resentment. Luckily Stephen has always written brilliant female characters so the more he included about Elli – and Rosa Luxemburg, too – the better the text became, and the more impact the ending had.

Can you say a bit more about how you worked with Stephen to give these characters a greater role in the finished text?

As an editor, you find that authors all have their little quirks, be that favourite words or approaches to narrative that recur in their work. Stephen often likes to allude to scenes or dialogue that are not related in the narrative, I think to introduce some ambiguity and room for unreliable narration by the other characters. It can work really well, but here I felt as if it was preventing the reader from connecting with Elli, and understanding her relationship with Koba. So the first thing I did was ask him to write the scenes featuring Elli which were initially only referenced. The key scene for me is the first walk that she and Koba take together. In early drafts, that happened 'off screen' and is related by Elli to Rosa but I felt as if that missed an opportunity to explore their chemistry and get a sense of what draws them together. Their relationship is very important to the narrative as a whole so I initially encouraged Stephen to develop that and as I did I think he got more of a sense of Elli as a person, began including more scenes with her and Rosa, and from there we ended up with the great friendships and characters you have in the final draft.

Finally, authors vary in how they respond to the editing process – it's not necessarily easy for them. Were there any sticking points between yourself and Stephen or did you find yourselves broadly in agreement over what needed to be done?

The biggest sticking point was actually the title. It took us I think six weeks of brainstorming to come up with something we all agreed on. Titles are often the biggest source of conflict and discussion with authors. This is the third novel Stephen and I have worked on together, and we've developed a good relationship, which helped a lot with that discussion and throughout the process. We did go back and forth on a few other things: Elli, for example, and the ending, which was originally longer. Most of what I asked him to do was to include a bit more background or to show us more of an interesting character – nothing controversial, and all of which gave him a chance to write more, which he loves! Some authors don't really like the editing process but Stephen understands that you're working together to polish the story and make it the best it can be for the readers. That's why I enjoy working with him so much. 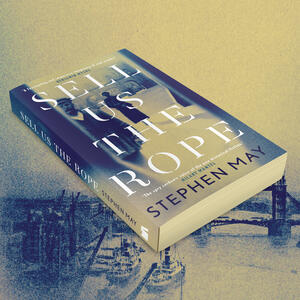