My Brilliant Career and Other Absurdities

The world is full of absurdity. When I read about the leaves being removed by hand from trees outside the Palace of Westminster I was reminded of the unfortunate soldiers repainting roses that were the 'wrong' colour in the Queen's garden. Alice wonders why on earth they're doing such a thing. In their case, it was in terror of the Queen who was inclined to order beheadings for the most minor infringement. Sometimes we seem to be living in Alice's Wonderland or – more often these days – Lilliput. The big-enders and little-enders of Swift's imagined world are no more ludicrous than some 21 st century terrorist groups and religious sects.

I felt a bit absurd myself this week. Along with other alumni I was invited to speak about my career and offer advice to today's Aberdeen University students about their next steps after graduation. Given the disaster my career has been – at any rate for about the first twenty years – I felt I was at least qualified to tell them what not to do. The students were conscious of time pressing, of parents urging them to think about jobs, make decisions soon. The reflection was good for me though, even if I wasn't able to provide a model for Success in Life. I didn't have anything resembling a career until my mid-forties; I never earned a lot of money; I ran two jobs for far too long – day job and Sandstone work – and I started a new career at the point where most people are giving up altogether and looking out the gardening tools or golf clubs.

It's as if I'm trying to cram a lifetime of work and fun into much too short a time. I've missed so much – don't want to miss another thing. I did miss something important this week, though, by keeping my appointment in Aberdeen. My fellow directors were in Edinburgh at the Saltire Awards, and were able to receive the Saltire Society Publisher of the Year award for 2014, for Sandstone Press. I was in my cousin's kitchen, glued to Twitter, waiting for the announcement. When the envelope was opened and the winner declared, she was as excited as I was and gave me a big hug, cheering along with me.

I didn't sleep much that night, but Linda's two kittens kept me company, peaceful at the end of my bed, getting up now and again to remind me I was their new Best Friend, then dozing off again, paws entwined.

Next day, off to the wonderful new Duncan Rice Library to speak to students, then visits to those of the generation beyond me who are still here, and still keen to hear my news. They're doing pretty well, but life in your nineties is not easy. The days are long sometimes; maybe one day mine will be too. At the moment, they seem all too short, crammed with things I must do, the things I long to do still getting edged out.

Time. They're picking the leaves off one by one because they say it takes less time than sweeping them up. Let's ignore the obvious nonsense of this for a moment and pretend it's true. What would you rather do – climb a tree and denude the poor thing of its last golden shreds of autumn, or wait and swoosh dry leaves together on a crisp frosty day, gathering up great armfuls for leaf-mould two years' hence, or a sweet smelling bonfire today? What has time got to do with it? The notion persists, of course, that time is money. The minute you let go of that idea, you're free.

And yet, and yet…. Marvell was right. The wingèd chariot is hurrying near… One thing's sure – whatever our age – Time is never on our side. 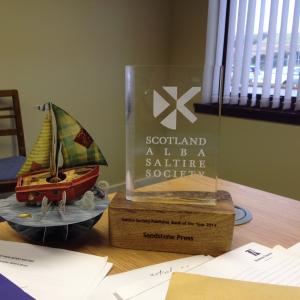