Although I've not posted anything here for months, this doesn't mean I've not been writing. I've been working on another novel. Or trying to. The weeks go past and I find I'm not much further on. I comfort myself by remembering The Treacle Well took seven years to complete, so a novel can be a long time in its genesis. I need more time to think about this one. Until this week, I've not had that time for months – other things have taken over, mainly work. At one point, I was editing six books simultaneously, all at different stages. There was no room for anything else in my head!

Be reassured – I'm not going to start writing about writing. Nothing more tedious, and nothing easier than to become utterly precious about it.

What's been in my mind is the experience I had last week of sitting on a panel of publishers and agents, listening to new writers pitch their work. It was a day organised as part of the Xpo North Festival in Inverness, an event mainly focused on other arts – music, film and design. It's all free, and the buzz at Eden Court Theatre when I arrived on Wednesday morning was tremendous. Creativity everywhere, with a huge crowd of mainly young people taking part in workshops and seminars.

The poor writers had to come in one by one, and they had exactly five minutes to pitch their novel or non-fiction book. I was on the Crime Fiction Panel in the morning, the literary fiction and non-fiction one in the afternoon. In between, there were two panels for 'Women's Fiction' a concept I will return to. I sat in on one of those for a little while, and may have found something of interest, though I certainly wouldn't call it a 'woman's novel'. As the writers spoke about their work, two things struck me. First, many of them, excellently pitched, sounded an awful lot better than the excerpts I'd read. (We'd been sent synopses and opening pages in advance, and I'd dutifully gone through them all.) Secondly, I wondered how on earth I'd have 'sold' in this way the novels I wrote in earlier years, before Waiting for Lindsay was finally accepted. Or even how I'd have pitched that. People have said to me in the past that I'm good at reading my own work but I used to worry I was too good at it – perhaps I made it sound much better than it actually was.

The week before Xpo I was in Glasgow, trying some of Sandstone's books out on BBC radio and TV drama producers, probably with as much likelihood of success as most of the aspirant authors. Great pitch, said one of the producers when I finished – so I'm good at that, it's just that of all the publishers they saw, if they take even one of our books, it will be a miracle. I know how these things go. With radio and TV people, you have to happen to hit just what they're looking for. Or perhaps, what they didn't know they were looking for.

With publishing though, it's what's on the page that counts. Not the pitch, not the tweet or Facebook post, the number of followers or friends, the profile you manage to project. All the publishers on the panels were concerned about in the end, were the words on the page. Later today I'll be reading the latest submissions to Sandstone (or at any rate the opening few pages – I don't have that much stamina!) before discussing them at my regular meeting with our new editor. This is great for me – she does the logging and replying, I just have to read the words. Now and then, a line, an image or a character leaps off the page, and I realise we've been sent something special. I love all my authors, but that moment of delight is rarer than you'd think. Send me a stamped addressed plain envelope for return, and I'll write back to tell you which Sandstone books to look out for…. Or, ok, send an email…

Which brings me back to A Message from the Other Side. Due out next year, probably late summer or even as far as November. Oh dear.

I'm reading the biography of Iris Murdoch just now, and her direct and uncompromising gaze challenges me every time I pick it up. Get on with it, she says. She's one of those writers who sets you free to do what you like with your own work. Hers is uneven, but there's a lot of it to choose from, and the best is brilliant: funny and true and profound. All those women who have gone before, that I admire so much – George Eliot, Jane Austen, Elizabeth Bowen, Elizabeth Taylor and Irish Murdoch. That's women's fiction, if you like, in the best sense. 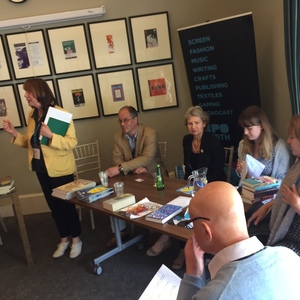