On the train to Edinburgh last week, I was joined by a young man with a beguiling smile (good) and some work papers that he laid on his side of the table, suggesting that if we spread out our stuff, nobody else would try to sit there. I had already set out i pad, newspaper and notebook with just this strategy in mind, but it was a quiet train. He had long hair tied back in a pony tail (not so good) and seemed inclined to talk. So we did. He was a Tai Chi teacher who had intended to travel widely and make that his life. Then his girlfriend got pregnant, he had a son, and the girlfriend having hightailed it to another country, he was bringing up the child. (Very good!) Now his life, with a poorly-paid but socially conscious job, a wife and a new baby, had become rather different from the way he had imagined. He was still wondering what to make of the rest of his life – what should he care about, what should he do? I told him that it had taken me until my mid-forties to come anywhere near living a life I really meant to live, rather than one that duty, love and chance had brought about. He may not have been all that reassured by this, since he couldn't have been more than thirty.


He asked what I did, then what my books were about. Families, I said, relationships, secrets. Goodness, I thought, I've made it sound awful dull. But he seized on this. What advice, he now asked, could I give him for dealing with an Evil Mother-in-Law?

I've been a mother-in-law myself for nine months or so, but not, I do hope, an evil one. HIs, I admit, sounded a bit of a battle-axe, but I also suspected he was completely unable to see his marriage to her beloved daughter from her point of view. When I related this story back in the Sandstone office, one colleague said 'get your hair cut!' was the advice she'd have given, and though I didn't think of this at the time, it was probably the one thing I should have said to him.

Instead, I suggested that as Mrs Evil lived many miles away on the south coast of England, and he was obliged to put up with her on visits only, it was best to say as little as possible, and if he could, keep it sweet. It was the good advice my own mother had given me when my parents-in-law descended for a fortnight's visit three months after my son was born. We lived so far away they decided, I'm sure, that it wasn't worth making the journey for less than two weeks, but I was a new and uncertain mother, just getting to the stage when every moment with my baby was joy rather than anxiety, and I simply couldn't imagine how I would cope. I had a kind mother-in-law, but I was a self-conscious idealistic young woman, and extremely uptight.

Sometimes, my mother said, it's best just to bite your tongue. Once you've said something, you can't un-say it. Then feelings are hurt and everyone feels terrible. She had had to do this with a much more difficult mother-in-law, and she managed brilliantly.

She had grown up of course in an age (and a place) when you did not talk about your feelings, or give way to them, or risk upsetting other people. In my most melodramatic moments my mother was at her most severe. She was a great advocate of self-control.

The Treacle Well doesn't just draw on my physical background, Aberdeen and the surrounding countryside, but also on the time and the moral framework within which I was brought up, as were my contemporaries – there was nothing unique about my family's approach to life.

In the novel Janet is told a secret she would much rather not have known. Worse, it's something she can speak about only to her husband. She's stuck with it. Other characters have secrets they must hold on to – and an increasing distance between them and other people is necessary to maintain that silence. It's a story full of secrets, but I don't see that as odd or different from the way most families conducted their lives in the 1950s and 60s.

In those days, I resented being told to think of others, not to express myself openly, to guard my tongue. Now, I am beginning to think there was a great deal to be said for it. I wonder if, meeting the young man on the train twenty or thirty years ago, I'd have told him to 'have it out' – talk to his wife, his parents-in-law, sort out the problems.

Maybe those of us who were fortunate enough to grow up in one of the 'good families' I write about – for all their flaws and tragedies – always come back to thinking the way our parents did, in the end. 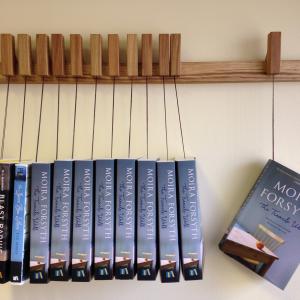