In Praise of Nothing

For years I set the alarm for 6.20am, giving me ten minutes to wrestle myself from sleep before I had to rise at half past. I heard the thump of the boiler coming on in the kitchen, tried to catch the atmosphere of the fading dream, always more vivid in the morning, then pushed the covers off and got up. Now I was into the day, and had to think about work.

I don't have to set the alarm now and the work is very different. Yet when I'm not working I feel guilty, and when I am working, I don't think I'm doing enough. That's the trouble with growing up in the north-east of Scotland, you're stuck with the work ethic, handed down (in my case) through generations of farmers, blacksmiths, innkeepers and other rural folk who had no time to sit about during the day and would have thought you a lazy so-and-so if you did. Hard work never killed anybody, my mother told me, and though of course she was wrong – it often has – I didn't dare to say so. That was 'answering back', a mere shade away from disrespect. Life was meant to be useful, and what is more useful than work?

I love work. A day spent busy and active, a day where you can look back and say 'I did that, and that and that… ' is a good day.

The trouble is, we're losing the distinction between a good day well spent, and keeping going all the time, blurring the lines between home and work, family and work, leisure and work. I don't mind the blurring, I want an integrated life that isn't parcelled up into separate boxes. As for the idea of work-life balance – work is life, and if it's not, what on earth is it? Not an out of body experience, that's for sure.

What we've lost is the dreaming space.

We work, we have holidays, we take care of our houses and gardens and the necessary stuff about paying bills and remembering people's birthdays. If we don't spend our weekends dog walking, climbing hills, going to the gym, dance classes, football matches, etc. etc. it means we're spending them getting in and out of our cars ferrying children to dance classes, tennis, swimming…. etc. etc.

Now that we have our wee devices, the blank spaces where we wait for the dentist, the doctor, the train, the plane, are all filled up too. Everywhere people are poking at their phones, frowning at messages, or holding them close, talking, talking, keeping themselves from being alone. If it's not texting or email it's Facebook or Twitter. It's as if we're not real unless we've told someone else where we are and what we're doing, as if we can't exist in an empty space, in silence.

I'm a big fan of silence, which makes me quite an annoying person to be with if you want to listen to music or watch the TV ads with the sound turned up. (Why would you?)

Last weekend, on a short weekend break with family, blissfully well looked after in a very good hotel, we parted at 5 and agreed to meet for drinks again at 6.30. I lay on my bed in the pretty bedroom, put a cushion under my knees to rest my book on, and piled the pillows up behind me. Suddenly it struck me that there was absolutely nothing I had to do. No emails to answer, no editing, no discussion needed, no dinner to make or garden to weed. I didn't even have to read the book.

What I felt was a relief so dizzyingly unfamiliar it was like the first fizz of alcohol on an empty stomach, rare enough (on both counts!) to be strange and yet exhilarating.

I lay back and closed my eyes. Nothing.

Slowly into the blank space came wandering the characters I'm just beginning to write about and who might be in a new novel one day. All I have are fragments, sketchy beginnings of chapters that don't yet fit together. And I remembered all over again that if we don't allow ourselves dreaming space, empty time, nothing original will be created.

Put the smartphone down, turn off the radio, sit quite still, sit in silence.

No, wait. It won't be nothing for long. 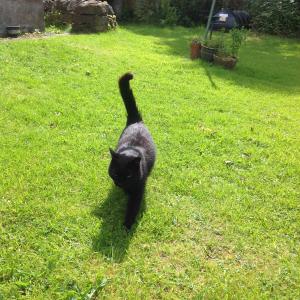