Do you remember when Microsoft Word used to default to Times New Roman 12 point, whenever you turned your back? You thought you'd set up a nice cuddly invitation with Comic Sans, or a bold leaflet with Ariel, when bang, one wrong click, back to Times New Roman.

Novelists are like that. We all have default themes and ideas, and however hard we try to move away from them, they creep back in. With Irvine Welsh, it's drugs, sex and violence. I don't need to read the books themselves – the reviews make it clear enough. Goes even further… even more outrageous… Doesn't mellow with age… I doubt if it's any kind of choice for him now; he couldn't write a book without all that stuff if he tried. I have huge admiration for Hilary Mantel, not because she's written Wolf Hall, but because before that, she wrote so many unique novels. I dare say though, if I looked hard enough, I'd find the default.

With me, it's pretty obvious. I don't mean women's lives or family relationships – these are hardly mine to claim. I mean the missing people. In Waiting for Lindsay, a child has gone missing thirty years ago, and the fallout is still reverberating in the lives of her siblings and cousins. In David's Sisters, David keeps going off, then turning up again, but in presence or absence, he disturbs the lives of his sisters. In Tell Me Where You Are it's Susan, careless and carefree, who betrays her sister, abandons her husband and child, and in the end, might just have excluded herself for good.

In The Treacle Well, someone leaves but is still a powerful presence, haunting those left behind. I can hardly give away more since it's not out till May 21st, but the theme is still there. Every time I start another novel, or attempt it, I tell myself it will be different this time. I'm about 40,000 words into a new one now, untitled and still shifting, but damn, somebody disappears…. Clunk. I'm back in default font. Whether this is something deep and meaningful in my own background or psyche, I can't tell. I worried at it for a while – who's missing in my life? Only cats. They vanish, get run over, join the Foreign Legion, goodness knows, causing terrible heartbreak, but I doubt if that's why I write the stories I do.

For a while I thought it might be because of the missing brother, the one my negligent parents did not have before my sister and I were born. We longed for an older brother, and my best friend Helen, an only child, was equally bereft. So we made up brothers. We walked the mile and a half to school together daily, talking about those pretend brothers, inventing lives and stories for them. Now I can't even remember their names. Not content with an imaginary older brother, I also invented a twin for myself. His name was David, and he was always in mischief. David's Sisters? Perhaps, after all those years, that's where he resurfaced. It was easier to create stories about a troublesome brother than an ideal older one, kind and noble but distant.

All my life I've made up stories about imaginary people, the earliest for my wee sister when we were in bed at night, but not sleepy. (This happens a lot to children.) Then at school, I wrote many chapters about The Beatles, The Stones, The Beach Boys… and all my friends were included, so that we had between the pages remarkable adventures with the stars we were never (in Aberdeen) going to meet. My friend Carole did the same, and we passed our marble-covered exercise books, with their handwritten tales, around the class. I wonder if she still writes stories too?

The thing is – there was not a single missing person then, or in the first novels I wrote – all unpublished. It was a long apprenticeship. Writing is different now, much more self-conscious – particularly since I became an editor – and of course harder work. But still, when the story stretches out in front of me, and I begin to see what might be round the next corner, what might happen to my imaginary people this time – it's just as exciting as when I made up stories about the Black Clover Gang for my wee sister, and acted out all the parts in the shadowy summer bedroom, during those long childhood evenings on our own. 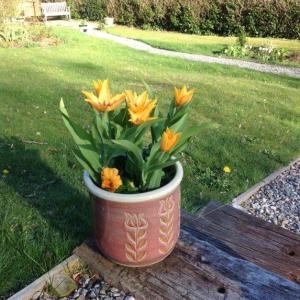