Every writer is asked 'Where do you get your ideas from?' Probably visual artists, and for all I know, musicians, are also asked this. Writers' answers are unsatisfactory for readers, since what people really want is to understand how art begins. Where it comes from is less important than how you begin, what you do to turn a memory, a dream, a conversation, into fiction.

I asked the question myself the other night, at the Kilmorack Gallery's new exhibition of Eight Sculptors and their Drawings. http://www.kilmorackgallery.co.uk/ This, we may surmise, is how sculptors begin: with sketches in ink or charcoal, using scraps of cartridge or huge sheets of that thin woody paper that's fit only for rough drawing. What did we call it in the art class? Another word that's gone missing lately. (What happens to all the words and names I keep forgetting? They must be floating around in space somewhere, waiting for me to catch and bring them back to earth. One day the wind will change and they'll be gone, whooshed away, leaving me with a diminished vocabulary and an unhealthy dependence on the Thesaurus.)

Where was I? Giraffes.

People familiar with Helen Denerley's giraffes on Leith Walk in Edinburgh will know she fashions creatures from scrap metal as large as those giraffes and as small as robins. Part of the Kilmorack exhibition showed her drawings for a life-sized cow, with measurements scribbled alongside. She was at the preview, so I asked her, 'How do you begin?' 'With the head,' she said.

I wish it was as easy with novels. Start with the head. For a long time you don't know where the head is, or indeed what it is. So you begin with a scene in a café, the shattering of a pane of glass, a drive through the dark by someone who's afraid of the thing they're speeding towards.

The drawings of fine sculptors, like Helen Denerley or Gerald Laing, both featured in the exhibition, are works of art in themselves: you would pay good money for a bit of a cow drawn by one, or a pair of disembodied legs by the other. The massy solidity of Laing's bronzes bears no relation, it seems at first, to the delicacy of those airy sketches. And yet they are parts of the same whole, the body of work.

It's only when authors are famous (and often dead) that anyone pays for their early drafts, the scribbled pages. Now, with everything written straight onto the screen, few authors have those messy pages, or indeed early drafts. Perhaps it will become harder to spot where the story begins, or how.

It doesn't matter: only the artist can really know how a rough sketch of a woman's body leads to the intimacy of the heavy bronze nude, her head bowed, smooth and beautiful and mysterious with her secrets. Only the writer knows how the overheard exchange of words, the view from the window, the bang of the car door, becomes the poem, the short story, the unwinding novel with its complex structure and cast of characters. In the end, only the finished work matters, and how good it is.

I meant to write about how things begin, but find myself once again at the end: who looks at the sculpture, stroking an admiring hand over it, feeling its curve and density; who picks up the book and reads and loses herself in the other world?

It seems that Chris Grayling's mean-spirited act in withholding literature and other breath-of-life ordinary things from prisoners has not been forgotten. So this week I'm joining the Howard League's campaign and sending some books to the Minister with a letter asking him to forward them to prison libraries. I still think about Castington where I once taught, so at least one of the books I send will be directed there. http://www.howardleague.org/booktograyling/

I do wonder though if Christ Grayling now has an office that looks like the back of a second-hand bookshop, with toppling piles of books lining the walls, because he can't be bothered sending them on, even via his team of secretaries and underlings. So there they are, encroaching slowly, so that one day he'll trip over a pile and go flying. Sitting on the floor nursing his broken ankle, waiting for help to come, he'll notice a book lying open and something in it will catch his attention. It's late at night and everyone else has gone home or is arguing pointlessly in the Chamber (do they still have all night sittings?) so for some time he is on his own, with nothing to do but read.

I suppose it's quite unlikely anyone will have sent Donne's poems for a prison library, but if they have, he might find himself reading these words, and pondering. Well, I hope he ponders anyway, even if it's Harry Potter or Dr Who he's reading about.

No man is an island 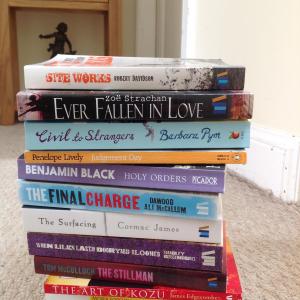