For the last few days I've been staying with my daughter and baby grandson while my son-in-law was away. The baby is nearly four months old now, aware, alert and full of smiles. I had a lovely time, of course I did, especially for someone who doesn't much like leaving home.

I know I'm home when the road from Tore to the village turns, the landscape opens out and there's a wide vista of hills along the horizon, milky blue in the afternoon sun. Next morning, on my early run (run-walk-run-walk on the uphill part, let's admit it) I know I'm home when the people in the cars passing me poised on the verge to let them go by, give that swift excited to-and-fro wave people do when they know you and are not just acknowledging you've got out of the way. I know I'm home when on the brow of the hill I see the full length of Ben Wyvis and Little Wyvis, nearly all the snow gone, over on the West. When a pheasant starts from the undergrowth and trots briskly to his next appointment. When the Shetland ponies pause in their chewing and gaze solemnly as I stop to speak to them. When I go round my own garden picking a few of the daffodils that have tipped their heads over ready to open, since I left.

I've been thinking about home, and what it means. It still seems strange to be in my daughter's home, to realise she has one, a four-bedroom house with a garden, her own furniture and pots and pans, her own way of housekeeping, her own favourite recipes. She's at home there: coming back to stay with parents she says now, 'coming north' or 'coming up' not any longer 'coming home'.

Home is where things stay mostly the same. We feel indignant when anything changes in our absence. When the new Dingwall Academy was built (a fine modern school to replace a draughty and dismal old one) my son was quite put out – there was nothing wrong with the old one, he said, though he'd not expressed any particular fondness for it while he was there. Down in our village the old bridge is being replaced by a new one, and the construction work has been going on for months. The new bridge is operational, but we've still got four-way lights until the approaches are complete. We're largely tolerant of the holdups, knowing the junction will become much more efficient than it was.

R. stopped the other day to gaze at the huge crane now being used to dismantle the old bridge. As he chatted to a couple of the construction workers and took photos of the crane against a brilliant blue sky, an elderly woman passed him on the footpath. 'Ah,' she said, shaking her head, 'Muir of Ord just isn't Muir of Ord any more.' To which I think most of us would say, hurray, as the recent improvements and changes in a too long dreary and dilapidated High Street have been wholly positive! And yet, she didn't see it. She perhaps still saw the village as it was thirty or forty years ago, with other businesses, long departed, flourishing there, the bank branch that's now closed still open, and the post office too. Perhaps it didn't seem like her home any more.

I've been obsessed with houses all my life. I write about them, dream about them, plan for them, long for them, remember them, invent them. The houses mean home. Years ago, Sandstone Press published a memoir by Remzije Sherifi, an Albanian Kosovar who with her family had to flee her house during the Balkan crisis of the 1990s. She and her husband had only recently moved in and they had planned that it would be their home for many years. In a night, it all changed and they had to get themselves and their children out. She had to leave everything. I think of her when I read about Aleppo or Musil, when I see film of refugees in makeshift camps. Home is what's familiar and secure, so when all of that has gone, you have to create something familiar in whatever temporary shelter you can. Remzije has made her home in Scotland with courage and generosity; recently she was named as one of Scotland's Women of the Year, for her work with the Maryhill Integration Network in Glasgow.

When she was a child, my daughter said, home's where you go to be grumpy – it's the safe place, where you can say and do what you like and you'll still be part of it, you'll still belong. Last night an unearthly yowling in the dark told me Mr Sparks was on the battlements with full armoury, as yet another foolish cat attempted to cross his territory. Even he knows what he means by home. 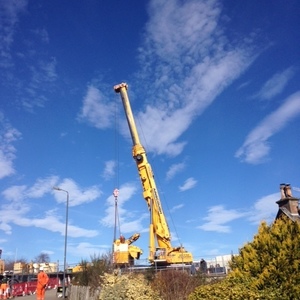