What I'm best at is beginning. Ending is more troublesome. I did once write a novel that ended with a wolf leaping at someone on a Highland hillside, but even I realised that wasn't any good. The rest of the novel was fine, and when I changed the end, it was better, but still unsatisfactory.

Perhaps all novel endings are unsatisfying. I've had a couple of comments recently on Facebook from readers of Tell Me Where You Are, saying how much they liked it, but where was the sequel? They couldn't believe I'd leave them hanging like that.

If you've not read the novel and intend to do so sometime soon, LOOK AWAY NOW as they say on the football roundup. (In this case, I usually take the advice willingly and go to bed…) The next paragraphs are a bit of a spoiler.

Where was Susan? What will happen to Kate now? These are legitimate questions for the end of the novel, but not once did I think of answering them in another story. Yet I can't think of a single time when someone's said to me 'I've read Tell Me Where You Are, and not added immediately – 'Are you writing a sequel?'

As far as I was concerned, the point at the end of the novel wasn't 'Where's Susan?' but simply, it doesn't matter where she is. She has written herself out of the story, out of the family life she was so contemptuous of in earlier years. There is a kind of happy ending for everyone else – though it's far from ideal and lots can still go wrong. But Susan can no longer drift in and out, taking what she wants, and leaving people miserable and angry. For years, she has been able to hurt Frances, her older sister, and to a lesser degree, Gillian, but now the gaps have closed, and Frances at least, simply doesn't care. I also wanted to leave just a tremor of possibility that Susan isn't anywhere any more.

What I wanted, in fact, was an open ending. Novels need resolution, but they don't have to be the kind of resolution that ties up all the ends neatly in a bow. Novels don't have to end with weddings or births, don't have to end with an additional chapter telling you what happened to everyone – Mary Goodgirl married Charlie Boynextdoor and they lived happily ever after in Rose Cottage, having three children, two boys and a girl. Mrs Busybee continued to go downhill, growing ever more cantankerous and finally dying of apoplexy when she discovers her cleaning woman hasn't the brasses properly. The Reverend Fiddlesticks converted to Buddhism, left the parish and was last heard of in Tibet. Actually, I'm beginning to think there's a novel here, if not a very serious one…

I recently had this discussion with one of our authors, whose dark and suspenseful new novel, A Private Haunting, will be published by Sandstone next year. I felt the end left too much up in the air. When you have lived with powerful characters all the way through a book, you want some closure, as one of my Facebook correspondents pointed out. That doesn't mean though that all the questions have to be deal with. Modern novels tend to have more open endings than those of the Victorian age, or even the early 20th Century. The journey is what matters: at the end you must feel you have reached a different place. It might not be entirely satisfactory, but things are very different from the way they were in the opening pages – for the reader, and preferably for the characters too. They have gone through their troubles and joys, and the reader has learned something, knows more than they did at the beginning. Occasionally, having just finished an 'open-ended' novel, I have gone straight back to the beginning and read it through again. Did I miss something? What really went on here?

Maybe this is why in my bedtime reading, I'm back with Agatha Christie. Everything is neatly tidied up there – I don't have to think about it when I'm not reading it, or when it's finished. It just doesn't matter. My head is clear for whatever I'm writing myself. It's true that to write you have to read, and read good literature, but when you're in the middle of writing something yourself, it's hard to cope with other writers' imagined worlds. As a teenager I was deeply immersed in DH Lawrence. I even read stuff like The Plumed Serpent (don't bother). The result was it took me years to rid my own writing of sub-Lawrence phraseology and ideas. I'm not so readily influenced these days, but recently did find myself, after a re-reading of Elizabeth Bowen, adopting her distinctive style, mainly because I was trying to do something in my own work that echoed hers. Went back, read what I'd written, sorted it. But the danger is still there!

The end of a good novel should leave you feeling drained and yet on fire. For a little while, the novel should possess your soul, hold your mind within it. Then it fades, you get on with other things, pick up another book, and willingly enter a new world. 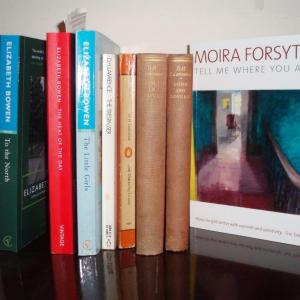