Working at home has many advantages even if you don't include the opportunity to bring the washing in when it starts to rain. It has disadvantages too – you're there to answer the doorbell during the day. It doesn't often ring here, as I'm in the country, but the other day I opened the door to a handsome young man (good start…) who invited me to a Mission meeting (less good follow up) and asked me if I was troubled by what was happening in the world today.

By the time I'm in the hall and can see the outline of the people on the doorstep through the opaque glass panel in the inner door, and am wishing I'd pretended to be out, it's too late. They can see me too, my wavering silhouette.

Two elderly ladies, clutching a bunch of leaflets. There are always two, one who speaks and another who stands behind her smiling tentatively, in the manner of someone who has been ordered to keep out of it unless things turn nasty. The first stepped forward, not just into the covered arch of the external porch, but inside, right up to me. Too close, but if I moved back an inch, I knew she'd follow, so I stood my ground. She started with the weather, what a beautiful morning blah blah, then said, 'You've probably got your own religion, I'm aware people have been going to church in this area since long before I was born.' To this idiocy, there is really no reply, and anyway, she didn't stop to permit one. After a bit, I managed to break in to say, thank you for calling, but I work at home and have a very busy morning, so…..'You will read our leaflet, won't you?' she asked, or perhaps threatened. 'I'll look at it,' I said, prevaricating. More remarks about the sunshine and my lovely garden (it's not, very weedy and the grass wants cutting…) then she stepped even closer and said how nice to meet me and her name was Jennifer, what was mine?

Finally, they went, and I ran upstairs to my interrupted work.

Twenty minutes later, the bell rang again. Well, I thought it can't be them at any rate. But it was. Not the two women, but a young couple, man and woman, both capable of speech this time, and smiling and telling me what a lovely day it was. 'Goodness,' I said, 'you're the second lot I've had this morning.' Much laughter, apologies, more stuff about the weather and the garden, then they too departed.

I got away with only one leaflet, which is something I suppose. On the back it asks 'Which of these big questions concerns you most?' You can guess what they are: What is the meaning of Life? Is God to blame for our suffering? What happens when we die? It is not possible to answer any of these questions in an evidence-based manner, so I'm not going to try. Anyway, I'm pondering another of Life's Big Questions.

How is it that nobody has good manners any more? It seems to me the height of impertinence to enter someone else's house uninvited and ask them about their religious beliefs. I'm planning my revenge right now. Imagine.

'Good morning, what a lovely day, it's wonderful to see the sunshine, isn't it? Now, I'm sure you have your own sex life, but I wonder if you've really thought about why we have sex?' (Flourish of leaflet) 'I'd like you to read this little booklet all about how to have satisfactory carnal knowledge of other people….'

If they're not turning up at the door, these intrusive people, they're on the 'phone. 'We'd like you to answer forty-five questions about insulation….' 'We're in your area and we can offer a free personal visit to discuss double glazing…' Still, not quite as alarming as the voicemail left on a friend's phone the other day: 'This is the FBI, and we have a warrant for your arrest. You will receive this in the next few days.' Good grief, I thought the FBI, like the proselytes, turned up at your door in twos, but unlike them, wearing homburgs, dispensing with chat about the weather and simply walking in to search the house. Now they ring you up first! I feel they're onto a loser though, so this is someone whose last major political activism was being a member of the local Community Council about twenty-five years ago.

So. That's one major life question I want answered.

The other is, where are all the black cats coming from? I had one already, then Mr S appeared about three years ago and rapidly made himself a comfortable billet. Then there was Archie, who had a perfectly good home on the other side of the village, but chose to stay longer and longer at my neighbour's house until he'd succeeded in spending a whole afternoon luxuriating on her bed. His owners took him away several times, but he kept reappearing. He's gone now, so I assume they've chained him to the house.

Then, this morning, another one. Dancing about in my back garden, playing with a mouse. I could see the poor creature escape then get caught again, over and over. Unable to stand it, I went out to effect a rescue. The cat took one look at me and bolted under the rhododendron bushes. Then, as if he realised he'd forgotten something, he dashed out, raced across the grass scooping up the unfortunate mouse on the way and disappeared in the opposite direction.

It's no good, I can't keep my mind on the Meaning of Life when there's so much going on.

Wedding cake made. Next time, a photo of the hat. 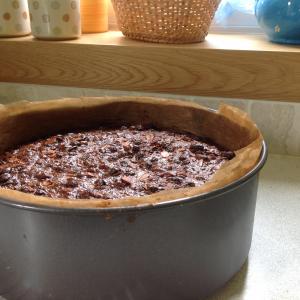