A supermarket chain (the one that takes a large slice of my income every week) has kindly sent me an email telling me how to spring clean my house in an hour. Now, let's suppose all houses are the same size, and can all be cleaned in the same time. Let's also suppose that you have already spent an hour gathering together your supply of bicarbonate of soda (including the pot you threw out last week because it had a use by date in 2011 and other stuff you need to do this super-clean.


Your hour begins here. In the first thirty minutes you're expected to spray the fridge with anti-bacterial liquid (nothing about picking bits of hardened food off the shelves first), wipe the oven with a paste of bicarb and water, strip the bed and (weirdly) spread your mattress with baking powder and lavender oil, and then – wait for it – clean all your windows.

I won't even go into what you have to do in the second half hour.

I'm pretty energetic (my children gave me 'Little Miss Busy' among my Christmas presents not long ago), though I admit I'm not young any more, but do every task they describe in an hour? Even if it's possible, and I don't believe it unless you're turbo-charged or live in a one-window bedsit, is this the best use of a spare hour? What's going on here anyway? Only last week Lucy Mangan wrote a very funny article about the advice Good Housekeeping has released on what housework should be done daily, weekly, yearly etc. Clearly, GH expect that we all still have at the least a housemaid and kitchen-maid to run around vacuuming and wiping down surfaces.

I admit you do have to do some cleaning – I'm not entirely in agreement with Quentin Crisp who believed that after the first year or so, the dust doesn't get worse. It's just that I can find better things to do, always. If it's not work (a great excuse), it's reading (for work, of course), and all the other things that are necessary to keep us alive and socially acceptable: cooking, washing, shopping, looking after children, or if they've left home to set up their own cleaning routines, cats, dogs, chickens or elderly relatives. Not necessarily in that order.

Today I baked a fruit loaf and spent my spare hour having a walk to generate an appetite to eat it. The walk was for more than that of course – I can bring myself to enjoy afternoon tea on a Sunday without any exercise. There was a fall of snow in the morning, but by the time we went out after lunch, the sun was shining and the sky clear blue, a transparent daylight moon floating behind the trees. We walked to the top of the hill and did the circuit round one side of the wood, and down the other, Ben Wyvis in full view, iced with new snow. We paused to listen to the silence, the only sound a faint trickle of water from a gulley where snow was melting.

As I get older, the hours you can snatch from work and day to day survival tasks, become more precious. An hour of walking is an hour for thinking, creating, solving problems, and for daydreaming. When I was little my mother would say, you're such a dreamer, and she meant it as criticism, for life was earnest and there was always something useful I could be doing. Now, if I called a child a dreamer, I'd mean it for a compliment.

Ok, I'll have a go at the spring clean in an hour. Some day. I'll report back and let you know how I get on. Think I'll give the lavender oil and baking powder thing a miss though. I can just imagine scraping that off the mattress. 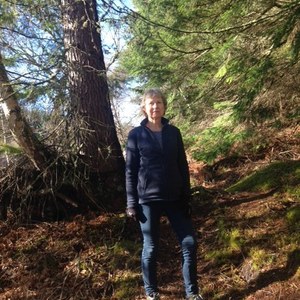