A Rant about the Radio

You know how it is, when the people you've been loyal to all your life, let you down? Should you protest feebly, but stick to them anyway? Perhaps it's best to let go, and fill your life with other things, other people. Somehow, you will deal with that empty space.

This is how it's been with me, these last weeks. The final straw was when a different set of friends (I call them friends, bear with me) also let me down. They have left me in an impossible situation. If I support their latest ideas and ideals, I feel a sanctimonious fool; if I don't, I look like something I really hope I'm not.

First, it was The Archers. The only so-called soap I've ever followed. I've been with them since Dan and Doris and Walter Gabriel were still around; I've grown up with Shula and Kenton and been on the journey the whole village of Ambridge has taken during my adult life. I suppose I must have listened in my parents' house too, as a child, half aware. But because I didn't have my own television for years after I left home, Radio 4 became my daily source of information and entertainment.

Anyone who follows The Archers will know the new editor has taken liberties. Several characters have started behaving as if they've taken leave of their senses; some indeed have had voice transplants. There have been unbelievable storylines, and he's even messed with the traditions on which the series is built. Just as David realises he can't sell Brookfield (my God, they had us there, I was beginning to think it would actually happen!) a flood of Biblical proportions arrives to sweep the whole lot of them away. I was reminded of the wonderful Tony Hancock episode when he had a part in a fictional series called The Bowmans. When he had the opportunity to write the script, in revenge for being written out of a good part himself, he made the entire cast rush across a field and fall into a bottomless pit. The current editor seems to be of the same mind, and I have wondered if at one time he was turned down for the part of – oh, I don't know – the revolting Charlie?

The second disappointment, since that is all it is, I mustn't get carried away, was today. Saturday Woman's Hour. I can't say I've always listened to Woman's Hour, or even always loved it, but it's been another ongoing signature tune, significant enough for me to get indignant when they changed the time from two o'clock to mid-morning. This was in the days before podcasts and I player, and as I worked in the mornings I was excluded altogether. Saturday afternoons, my small children were at home, so that was that, as far as the Omnibus was concerned. Indeed, I don't think it existed then.

Today, Woman's Hour was involved in something called WoW. I'm sure it's a great idea, a celebration of women etc. etc. but oh dear it was absolutely dire. Bring back the mysterious sizzling of a chef demonstrating a recipe Jane Garvey is obviously dying to eat; bring back useful pieces on the menopause or childbirth….

I hate women saying 'I'm a feminist, but….' There's no 'but' worth listening to there.

But…. Good grief it was worthy. Ethical pants, a choir anyone can join (and did) singing a most untuneful song, the idea of the pornography industry 'empowering' women, everyone trying desperately to be politically correct, especially poor Jane Garvey (whom I do love) and so on.

Yes, I did say 'ethical pants' and you're not allowed to call them knickers in case that sounds sexy. It's ok, WH, relax, it doesn't.

In the morning, I listened to From Our Own Correspondent, and was in tears, hearing the story of an Indian woman taken from her family by tea planters and forced into domestic slavery, something that's apparently common. It wasn't the only story in that moving and utterly absorbing half hour that described violence against women. There were the young women in the Philippines, training eagerly to be maids, so that they could get highly paid jobs and send money back to their families, to support the young children they were leaving behind. Where were they going to get these wonderful jobs? Kuwait.

I know Woman's Hour deals with this kind of subject too, and does it well, but somehow, plonked in the middle of all the ethical pants and choir singing, these topics seemed less vital and true. I am not sure why.

I probably will go on listening to Woman's Hour. And the blasted Archers. Some habits die hard. I'll go on being indignant too, of course.

This month's photo is my homage to the bits of Woman's Hour I still love - the easiest fruit loaf in the world! 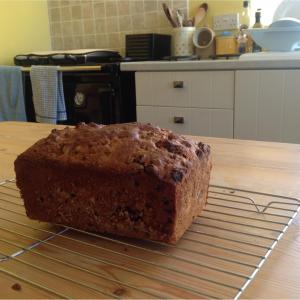