In Bed with the Philosophers

Over the last year or so my reading stamina has dwindled. This may be because I have a brain partially turned to mush by a diet of old Agatha Christies and Patricia Wentworths, my nightly escape from the current lunacy in world affairs. Despite there being so many murders it seems safer and more comfortable between their covers. Besides, that's all I'm fit for by bedtime.


The philosophers, requiring closer attention, must therefore be addressed in the mornings, as I attempt to recover some reasoning skill of my own. I've been reading At the Philosophers' Café – Freedom, Being and Apricot Cocktails by Sarah Bakewell. I admit this is some way removed from tackling Heidegger and Sartre directly but it's a start. Besides, it's such an enjoyable book.

Having fed the cat, cleaned out and re-laid the fire and put the washing on (what was it Simone de Beauvoir said about the tyranny of housework?), each morning I can, I return to bed for another chapter. The cat, an existentialist if ever I met one, polishes off his crunchies and follows me there. This is not escapist reading. For example, the idea of contingency: that however free we believe we are to choose minute by minute how to live and what to do, we are unable to ignore 'contingency', the direct impact on us of historical and world events, which are beyond our control. It's this helplessness that affects us now, as we watch from the sidelines (only maybe these are after all not the sidelines but the firing line?) while politicians make the most unutterable mess of huge changes they insist will implement our wishes.

By the 1950s, the existentialists (like many others) feared that the development of bombs with the potential to wipe out civilisations, heralded the end of the world. The freedom they valued so highly would be removed by others, in one cataclysmic action. However, the world didn't end, so perhaps we can take heart and believe it will not end now. Even politicians must have some sense of self-preservation? (Actually, most of the time, that's the trait they most openly display, if not in relation to the end of the world, certainly their own interests.)

In the early 1950s the existentialists start to fall out with each other. Unable to separate the ideas from the person, Sartre concludes that you cannot be friends with someone whose beliefs you abhor. This is a position that's becoming more prevalent: look at the virulence on Twitter and Facebook as people take up pro- or anti- stances, mocking and deriding their opponents. It's no argument to belittle the arguer, but we're tempted into this over and over. Soon it's impossible to see merit in anything they say.

I've been struck by the vitriolic response to Tony Blair's speech about resisting Brexit. The severest criticism has been not of his argument, but of the man himself. Can we trust him, we ask ourselves? We did before, and look what happened. His proposals and analysis have been despised and dismissed because he has voiced them. In many cases, of course, we are right to be suspicious of the polemic of those whose principles are not ours. Is Tony Blair now guilty of the ultimate existentialist sin, bad faith, a falseness, not being true to himself? Ah, he fell into that trap a long time ago.

Since reading this morning's chapter I've been pursuing an existentialist day. I rarely have a weekend on my own, but R is away, so the choices I make about what to do, and what to eat, are for myself alone. I don't have to please anyone else, or conform to an imposed timetable, or indeed listen to anyone else's views. Always when this happens I have a sense of being loose within the world, as if there are infinite possibilities hovering. Something important and unexpected might happen. You could call this freedom – though it turns out not to be freedom to act so much as freedom to think. Then, everything else I read seems to contribute to this new thinking, and complicates it: each article in the Guardian or the Washington Post (the latter picked up on social media), every incisive tweet or Facebook post.

I now begin to understand why practically every philosophical treatise is about 700 pages long. How can you ever reach a conclusion? The more you explore what you think, and others think, the more there is to explore. Miss Marple apologises for 'rambling' when she launches on an explanation, but at least Agatha Christie doesn't allow her to do so for several volumes. Which brings me to my favourite story so far at the Philosophers' Café.

John Huston asked Sartre to write a screenplay for what we'd now call a biopic of Freud. Sartre, having bills to pay, accepted and set to. He successfully completed a script for a film which would last about eight hours. Huston remonstrated, made him cut it, and Sartre, cutting but adding other scenes instead, then produced a film nine hours long. At which point Huston, understandably, sacked him.

Let me recommend this book to you, even if you're not a would-be existentialist, or a cat. It's beautifully written and full of good stories. I think when I've finished it I'll pay it the rarely granted compliment of turning to the beginning and reading it all over again. There's some faint hope my understanding might be better next time round! 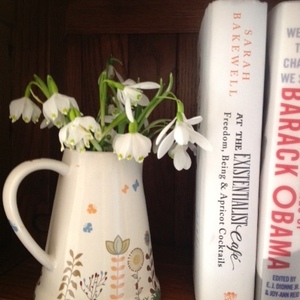